In our book ‘Dancing met Dilemma’s – Op weg naar wederzijdse winst‘ [2] we illustrated our Dilemma-to-Dialogue (D2D) approach by analysing David Cameron’s ‘Brexit versus Remain’ dilemma (situation June 2016).
Now, 2 years later, we decided to study Theresa May’s Brexit dilemma, which we think could be, as you will learn: Wanting to get the EU accept the gist of my Chequers white paper  – versus – Wanting the Conservative Party to stay in Government, with me in the driver seat.

With Brexit approaching, the number of publications on Theresa May’s challenges increases by the day. Articles, after the referendum in June 2016, focused on the political upheaval and unpreparedness after the unexpected outcome, the discrepancy in EU-sentiment between Parliament and the voters and why the latter voted as they did.

After the General Election in June 2017, when the Government parties lost their majority in Parliament, publications understandingly focused on the vulnerability of Mrs. May’s government, her balancing act with on the one hand maintaining the support of the North Irish Democratic Unionist Party (DUP) and on the other hand the threat of a referendum on independence initiated by the Scottish National Party.  And on three ‘concessions’ to the EU: accepting a substantial divorce bill of $39 billion, agreeing to abide to the rules of the Internal Market and Customs Union as long as an acceptable alternative to a hard border between Northern Ireland and the Republic has not been found and thirdly, acceptance of influence of the European Court of Justice on citizenship cases for 8 years after Brexit.

Since January of this year nervousness about the rapidly closing time window (Brexit by 29 March 2019 at the latest) has forced the focus on the two negotiating partners, their strategies, tactics and effectiveness. The EU is firmly holding up the indivisibility of the ‘four freedoms’: free movement of goods, services, capital and labour. But observers wonder why there couldn’t be some variation in the degree of freedom. Then there is the ridged timeline dictated by the EU’s withdrawal clause Article 50. To this end the EC has accepted a two year transition period for the full Brexit agreement to become effective. On the UK side Mrs. May lost two thorns in the flesh when David Davis and Boris Johnson resigned from the government because of her move towards a softer Brexit. Davis has been replaced as Brexit Minister by Dominic Raab and is now the negotiation opponent of Michel Barnier on the EU side. But Mrs. May has said she will be directly involved in the negotiations. A major improvement, at least with regard to the transparency of the playing field, is the Chequers white paper published in July. The paper details proposals in areas such as trade, safety and institutional cooperation.

What is May’s Brexit dilemma?

So here is Mrs. May. Time is running out. The conservative party is as divided as before. A no-deal scenario is not unrealistic. It has led to a flood of ‘No-deal technical notices’ coverings areas of concern such as the supply of medicines and has strengthened the call for a 2nd referendum. And Trump has briefly entered the china shop as the proverbial elephant, belittling May, glorifying Johnson and having tea with the Queen. The question is now: What, at this stage, is Theresa May’s dilemma? Obviously she has many.

Nick Hargrave, a former Downing Street special adviser who worked with both Cameron and May, presents the following[1]. Compromising on the campaign promises of Vote Leave versus Push for a ‘no-deal’, or as he crudely puts it: Break the [Conservative] Party or Hurt the country [because a no-deal will lead to a recession]. Hargrave, primarily worried about the future of his party, comes up with four points on which ‘strategic clarity needs to be hammered out’: Settle for an imperfect compromise with the EU now, accept the loss of members and voters, create an agenda for beyond Brexit and have an inspiring leader. If Theresa May is, or is not that inspiring leader Hargrave doesn’t want to say.

In our book ‘Dansen met Dilemmas’ we present a process to deal with a dilemma with a view of reconciling the opposing propositions into a win-win. In Chapter 6 we demonstrate this process, called Dilemma-to-Dialogue (D2D), by applying it to David Camerons Brexit versus Remain dilemma. The outcome: the UK should remain in the EU but change from obstructing its development into leading it. However, Cameron didn’t try to reconcile the two propositions but called for a vote and thus lost the advantages of Remain. With a choice for Brexit the dilemmas have changed. Let us see if Hargraves action points will lead Theresa May to a win-win. 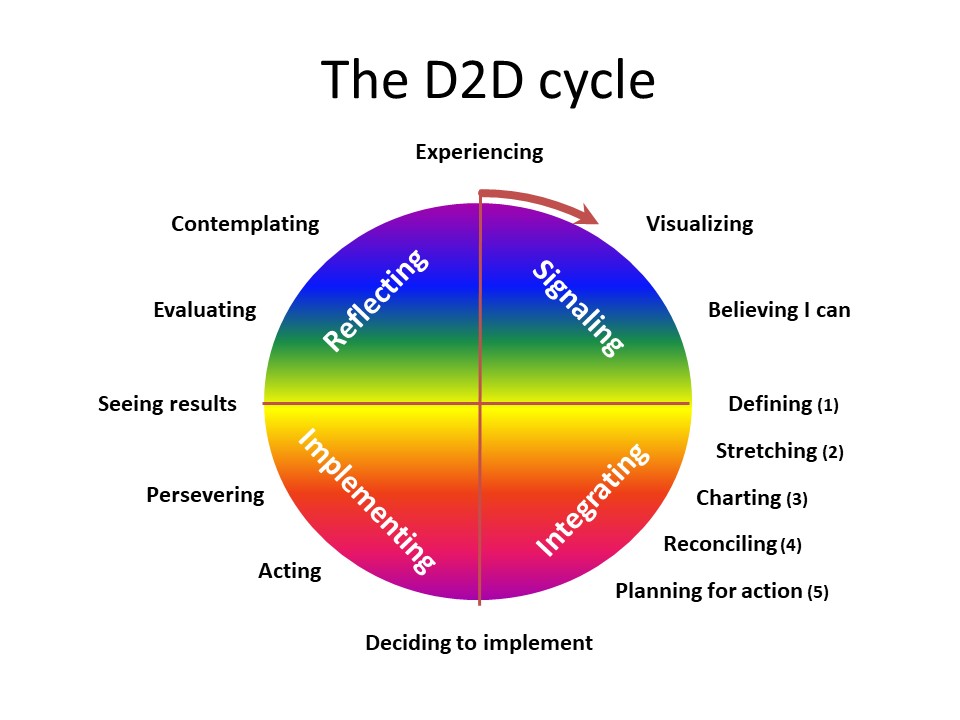 The four quadrants of the D2D cycle

We will concentrate on the five steps of the second quadrant, assuming that Mrs. May feels Hargraves dilemma, has visualized how it will be if this dilemma would not be resolved and believes she can manage it.

Step 1 of the Integrating quadrant is about defining the dilemma. After framing it, which Hargrave has done, the next question is who ‘holds’ this dilemma? Who is the dilemma owner? A dilemma has two propositions that are more or less equally attractive to the dilemma holder, but have negative consequences as well. Reconciling a dilemma worded as two negative propositions into a win-win is impossible. We therefore need to rephrase Hargrave’s opposing propositions into positive or neutral statements (I want, or I must). The dilemma could now be worded as:

On the one hand Mrs May wants to fulfill the Vote Leave promises whereas On the other hand she wants to create a no-deal.

The reworded dilemma may start you doubting if this indeed is her dilemma. Because, as Hargrave comments on ‘push for a no-deal/hurting the country’: “I suspect [this] will break the Party anyway”. Also the fact that one of his four points is the need of an inspiring leader, which may result in Mrs. May having to quit, makes it doubtful if Hargrave picked May’s real dilemma. When a dilemma holder has to quit through the back door it is not anymore his or her dilemma. We call this ‘going for the (1,1) or the denial/apathy position’, as pictured in the next chart, a dilemma-grid, which shows the various theoretical positions the dilemma holder can take. So what IS her dilemma? We think it is more like:

On the one hand I want the gist [3] of my White Paper accepted by the EU – whereas – On the other had I want the Conservative Party to be in the Government with me in the driver seat.

We can now continue with step 1 which involves Mrs. May getting clarity on who are the major stakeholders that support or threaten her respective propositions. We also try to understand what the particular proposition brings the stakeholder and what basic needs or values this may fulfill.

Regarding: Getting the gist of my White Paper accepted

As to the other proposition: Continue running the Government

Step 2
The second step of the Integrating Quadrant involves stretching the dilemma further by listing the positive and negative consequences of both propositions for the dilemma holder. 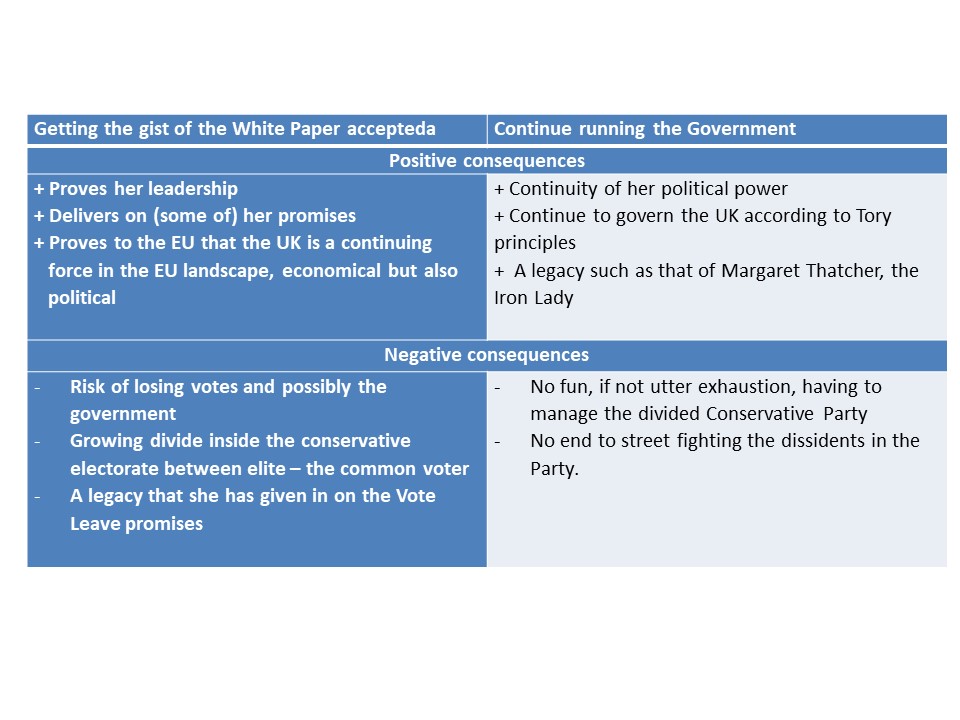 The third step is to chart the current positions of the stakeholders in the dilemma-grid presented below, including that of Mrs. May. 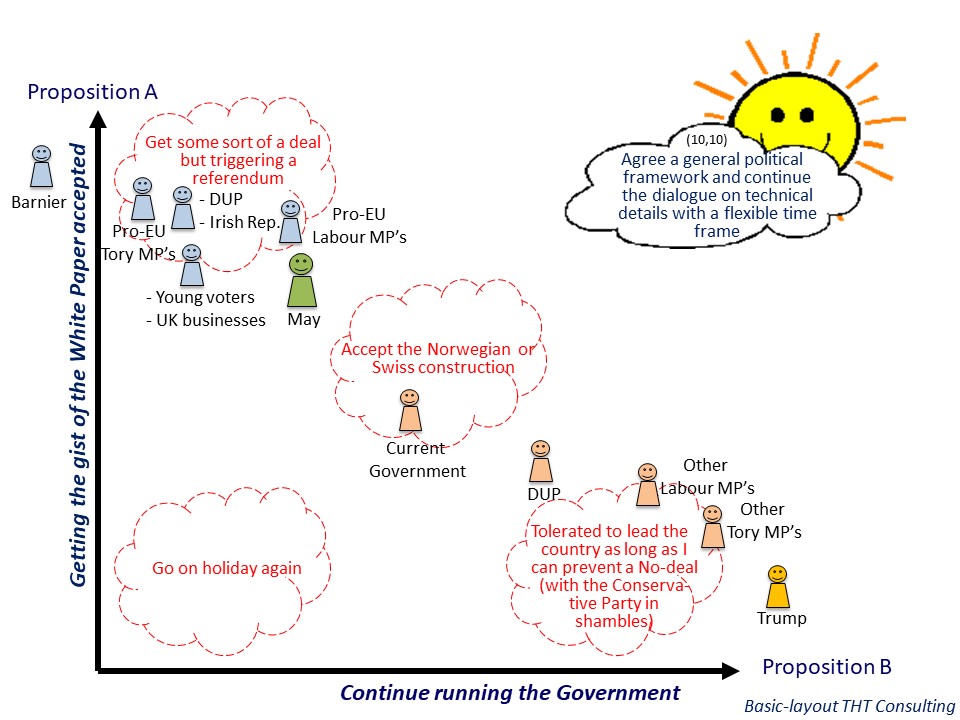 Note that the EU member states are not shown. Barnier sits outside of the grid as we assume that he probably has no preference as to which party or coalition runs the UK Government. The EU member states can also be pictured left of Proposition A-axes, but lower than Barnier, reflecting their limited interest (at this stage) in May’s Chequers white paper.

The red-dotted clouds represent the positions May should try to avoid. In the clouds we give the possible results of ending up in such unwanted position. To resolve her dilemma, or at least find some way out, she should steer for a win-win, the (10,10) position. How that may look has been entered in the cloud, but how to identify such reconciliation requires an explanation of the process.

In essence the reconciliation process (steps 4 and 5 of the bottom right quadrant of the D2D cycle) is based on realizing reciprocity between the stakeholders of the two propositions. This reciprocity involves one stakeholder offering something to the opposing stakeholder(s) that invites them to offer something in return. It is up to the dilemma holder, Mrs. May, to trigger and manage this process. We think that Mrs. May’s best approach will be to get a particular concession from the EU that would bring around those MP’s that are in some sort of hurry, that want to see a Brexit-Now. For Brexit-Now may easily lead to a No-Brexit which is bound to hurt almost everybody. It is about getting certain concessions that create some light at the end of the tunnel for both the UK Government and the UK pubic. One option may be try to agree that 29 March 2019 should not be the date when everything has to be cast in stone. The road to reconciliation could therfore have two lanes:

Obviously this is far from simple, but it may be the only way for Mrs. May to survive as Prime Minister and also realize a Brexit. It requires both negotiating partners to stop emphasizing the traditional difference between the Rule-based approach of the EU and the Principle-based approach of the UK. Indeed this difference exists, but we think that both approaches are rooted in widely the same values. Dealing with a dilemmas requires dancing with the stakeholders, understanding their positions, psychology and needs, focus on the future, on cooperation and mutual success and on building on shared values, such as safety, freedom and wellbeing. This is the essence of the last two quadrants of the D2D cycle. It will be fascinating to see how Mrs. May will perform the Implementation and Reflection sequences of her dilemma-dance.

[3] The Chequers white paper offers proposals. This indicates that the Government is willing to accept amendments. Mrs May’s focus is therefore on getting agreement on the key elements of the White Paper.